Hi everyone, I recently completed the setup of citrix provisioning services for a client. It included two PVS servers running on Windows 2008 R2 enterprise.


The environment looked like this:
Here is a visual look at the setup: 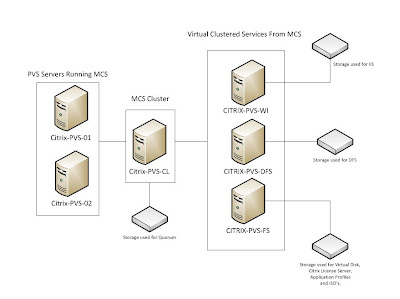 Test 3 - Failover of Server; shutting down one provisioning server (CITRIX-PVS-01).

Test 6 – Moving the citrix web interface from one node to another. The service (CITRIX-PVS-WI)

Test 8 - Failover of both node members


Test 9 - Failover of both node members when I have a plublished application on.